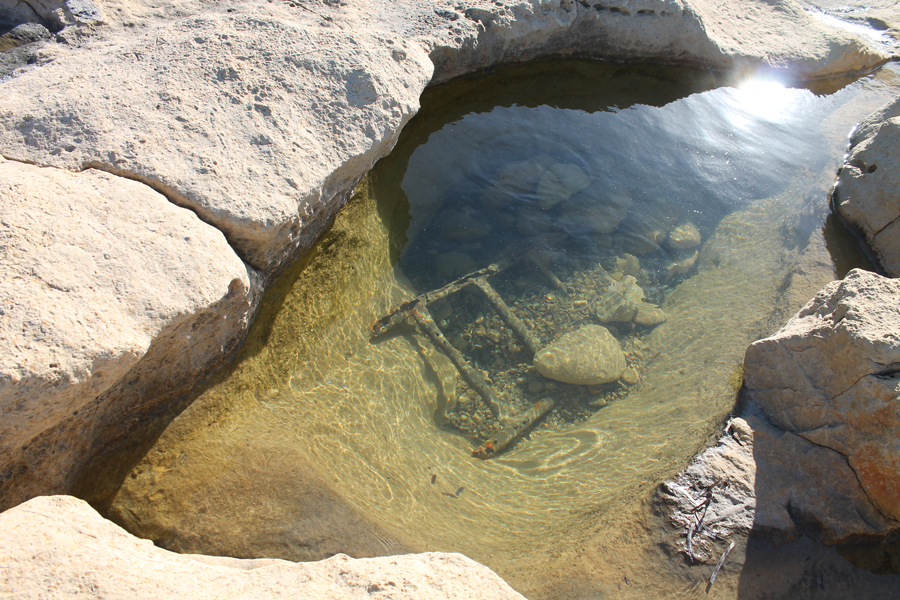 A 300-words flash fiction I wrote the 16th of March 2016 in a serie inspired by photographs from a prolonged stay in Malta.

If you see things often enough, eventually you stop paying attention to them. However extraordinary they seemed at first.
This was the case with the forgotten ladder in the water hole by the sea. Everybody knew about it.
And surely the first time you saw it, you would be taken aback by the peculiar scenario. Your head would fill with questions: where did it come from? Did somebody leave it behind, forget it?
Why has nobody removed it?

The truth is nobody knows.

Late afternoon the girl played by the sea.
Her mother nearby with a book, face shrouded by a sun hat. Eyes fixed on words. The girl wandered, exploiting her mom’s faltering attention.
The beach became desolated, she liked it. Nobody to disturb her mind’s adventures. She had fought battles here, saved dragons, slayed princesses. Found treasure.

It was cloudy, the sun ebbing alongside the sea.
Skitter of pebbles, she looked up. Nothing, but rocks and a water hole. She looked over the edge and, to her surprise, found a ladder.
“Weird isn’t it?” a rough, sing-song voice asked behind her.
Turning, the girl stood face to face with a man. There had been nobody, but there he was.

His clothing soaked, wet locks of hair embracing his features.
“They say it’s immovable”, he continued, twisting water out of the hem of his overcoat. “Say it’s a gateway, you know. Say it leads to another world”.
She couldn’t look away.
Suddenly his face twisted upwards, like vines growing at an unnatural rate. His wet hair parted, horns sprouted and were now gleaming in the setting sun.
“You know”, he said, cat eyes catching hers.
“They were right”, a fork tongue bid her farewell. 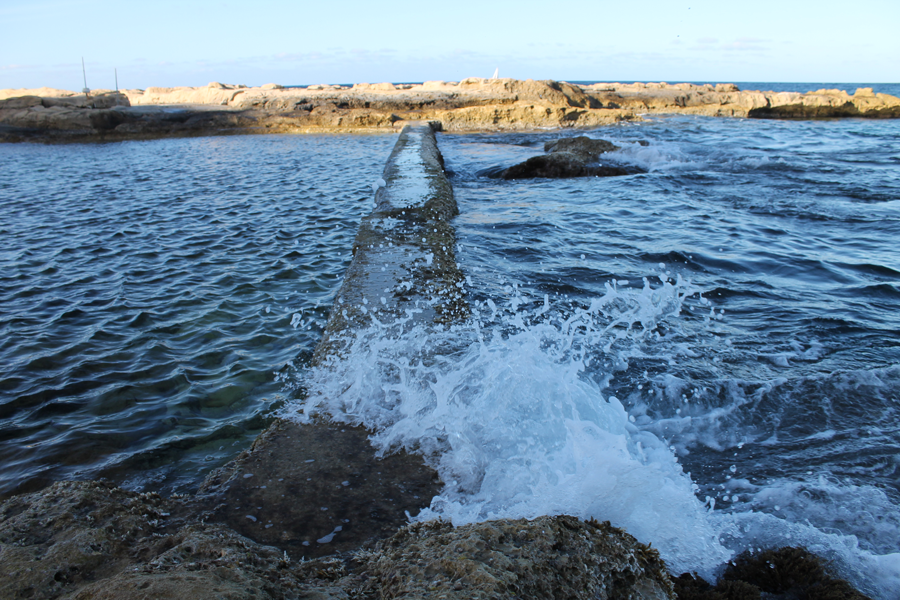 A 311-words flash fiction I wrote in 2016 in a serie inspired by photographs from a prolonged stay in Malta.

Their spiky hair barely moved in the seaside wind.
His hair constantly invaded his eyes and got into his mouth, when he tried to speak. When scouting the beach for channels, they walked ahead, he followed behind. The setting sun made their shadows long, made the boys seem just as big and important, as they thought they were.
His shadow constantly fell into the nooks and crannies of the rocky beach, disappearing. They tolerated his presence, he knew that. He could see it.
How they picked up the pace if he got too close, how one would sometimes glance over the collar of his leather jacket to check if he was still there. The shushed voices, when he got within earshot.
And yet he followed.

He saw them jump across increasingly bigger channels throughout the beach. The water was shallow, yet touching it was a disgrace.
He’d seen one boy misjudge a jump. When he saw him again, his hair was no longer spiky. When the channels had been concurred, when the blood was roaring in their ears, the boys looked to the sea.
They would dare each other to jump from one slippery rock to another in an unforeseen pattern.
The closer to the sea, the closer to the waves, the better.
But you couldn’t get wet.
The spikes and leather couldn’t handle it, and neither could your dignity.

He managed to catch up, but only because the boys had stopped at the bridge.
It was the ultimate feat.
Always wet from unpredictable waves kept the seaweed growing wild.
To reach the other side meant you were in.
Meant you had earned your spikes.
They turned towards him like clockwork.
A half-circle of narrowing eyes and smirking lips.
The crashing of waves roared behind them.
“Cross the bridge”, a tall boy said.
“If you dare”.
Magic words, cementing his faith 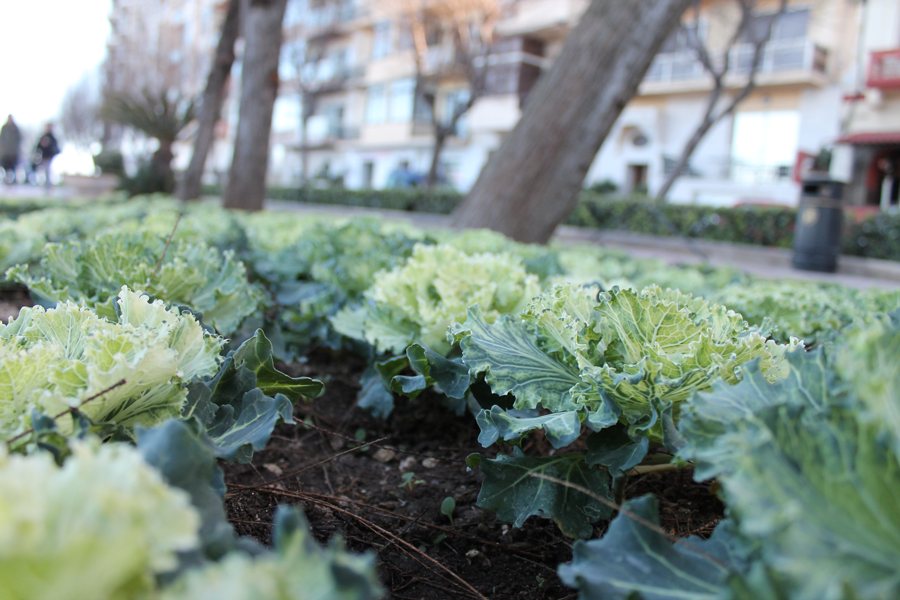 A 766-words flash fiction I wrote the 24th of February 2016 in a serie inspired by photographs from a prolonged stay in Malta.

There’s nothing magical about cabbage.
At least that’s what I thought before coming to Tas-Sliema. That’s what everybody thinks. At first nobody notices anything out of the ordinary, I mean why would you? Why turnaround from the breathtaking sea to look at the flowerbeds? Especially when said flowerbeds are covered in cabbage-like plants on militarized rows.

They came as whispers.
Tiny snippets in shadowed corners, in lazy afternoon sunbeams, in passing on a street corner. Cabbage. Everybody had their own ideas, their own versions, their own experiences. Looking back, it took me ages to grasp that anything was amiss. Despite this, there had always been an eerie sensation, like the hairs at the nap of my neck never really settled, a hollowness at the pit of my stomach. Cabbage.

I had to understand, to connect the dots, to uncover the truth.
I started asking around. The uninitiated were overbearing in their attempt to hide how they thought me insane. While the Knowing would become overwhelmed with relief, once realizing they faced a like-minded. I carried around a notebook, scribbled slices of people’s minds as I questioned and uncovered. Rabbit, cabbage, fairies, cabbage, gardener … cabbage. Always cabbage. They were at the center of it, it was clear.

Next step was a stakeout.
Night appeared to be ideal, to be the harbinger. It was then that things happened, besides when nobody was looking during the day of course. I placed myself on the first steps of the beige, stone staircase leading down to the sea. If I seated myself low enough I could remain out of view, unseen. I felt the ebbing heat in the sun-warmed stones, even though I wore thick jeans. The cap of my camera’s lens clicked as I removed it with a hand steadier than my heart. I waited, eyes peeled.

At first there was nothing.
But I returned. Night after night, whenever I could slip away. It took me awhile to see the signs, but then they stood out like freckles. A rustle, a chewed leaf, dirt on the pavement. Puzzle pieces, I thought to myself, I am good at puzzles.

The gardener became a regular as much as I.
We chatted, we connected. He agreed, but had hit a wall. I showed him my pieces of the puzzle and he showed me his. Together we would find the missing piece. I brought us coffee at dusk; he, a blanket for the steps. He had heard the whispers, started some too. It was unclear which were truth. Sometimes it felt like holding onto water. And then it hit me, what if they all were?

The moon was full, it created anticipation.
I was alone at the steps, the gardener away at a family thing. I studied the speckled curves of the cabbage leaves as they shivered in the wind. I shivered too. He had tried to remove the cabbage at first, tried several times, dammed be what the officials said. But always they returned. Changing the dirt did nothing. The unbeatable cabbage. Like graffiti in a tunnel. Always returning.

That night I saw a rabbit. It must have been. What else could it be?
It popped its head out of the rows, eyes meeting, and darted away towards the bushes. Towards the darkness. My camera dangling unused, I cursed.

Whispers aplenty, I had created a tapestry covering the walls of my bedroom.
With an old ball of yarn in hand I set to work, connecting the dots, looking for the missing piece.
I couldn’t open the windows after that, risking my work. No, I got plenty of fresh air during my nightly stakeouts.

I told the gardener about the rabbit. He cursed too.
They ate his plants. Fluffy balls of destruction, he called them.

Like the benches, I was a fixture, next to the ocean, among the cabbage.
I had gotten good at gathering whispers, so good that nobody could pass the cabbage unquestioned.

Another night on the steps, I was ready to see truth.
The rabbit had ventured out since the full moon, but I wasn’t looking for rabbits.
Rabbits didn’t have wings, didn’t make the cabbage come back unhindered. No, it was clear.
I saw a flicker among the leaves. A fledgling mirror of a dragonfly wing. Fairies.
A giggle, not mine, emerged from the flowerbed. Our eyes met, intelligent, not like the rabbit’s. She knew that I knew. The protector of the cabbage. On the promenade of Tas-Sliema.

They picked me up the next day.
Men in white, men of healing.
There isn’t anything healing about a strait jacket.